Cardiac Muscle is one of the 3 main types of muscles. This type of muscle is found in the Heart and is somewhat similar in structure to skeletal muscle cells.

It has a striated appearance. The contraction of this muscle group causes the movement of blood throughout the body. It also allows for blood to go from the Atria to the Ventricles of the heart.

Cardiac muscle is a main contributor to the Cardiovascular System and Circulatory. Elements such as nutrition, oxygen, and energy molecules are essential. Carbon Dioxide and other waste products are removed as well.

Difference between this muscle type and others are dramatic!

Other types of Muscle: 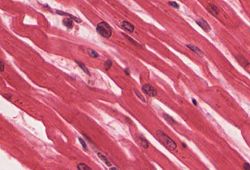 –  There is a very large amount of mitochondria that allow for production of energy molecules such as ATP.

–  There are many myoglobins that help in the binding of oxygen.

–  Oxygen is required and essential to pumping of blood.

–  The muscle itself has segments referred to as Thick and Thin.

–  Actin and myosin are found in both cardiac and skeletal muscles.

–  Calcium ions and Sodium ions are required in cardiac muscles to contract.

–  Calcium then binds to troponin which begins the contraction.

–  The central nervous system has a limited function in the contraction of the heart.

–  The CNS only controls the rate of contraction – it will speed up or slow down the heart.

–  There are specific cells in the sinoatrial node (SA node) that regulate heartbeat.

–  These cells are called “pacemaker” cells.

–  If the SA node has lost function either temporarily or permanently then cells from the atrioventricualar node (AV node) will then become the “pacemaker” cells.