A cholera in Haiti has been a huge outbreak. We’ve heard about this for weeks and have had expectation for months that something so drastic could occur. Currently more than 60,000 people have been affected or infected during this outbreak. Of this amount, more than 1,400 have died.

Cholera is an outbreak of the small intestines. It is caused by a bacteria called Vibrio cholerae. 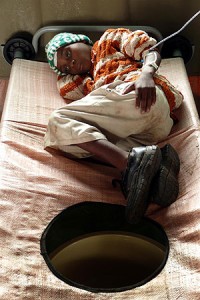 Transmission of this disease occurs primary through contaminated water. Often this contamination is the drinking water in places where such disasters occur, such as that due to the cholera in Haiti. Symptoms begin within 1 – 5 days after ingesting the bacteria. It is vital to replace the fluid that is lost during vomiting or diarrhea. Antibiotics can be helpful in some cases.

Throughout the world, each year, more than 3 million people are affected and more than 100,000 deaths occur.

The cholera in Haiti has affected possibly 200,000 – 400,000 people. This would present a tremendously difficult time for the people in Haiti. Can you imagine, that about 40% of those affected, in Haiti, require hospitalization. This is a very large burden on those health care portions of the country that have already be hit and are dealing with many other problems.

The first reported outbreak began in October. It quickly spread throughout the country. Many blame the U.N.

Medecins Sans Frontieres (Doctors Without Borders) said shortfalls in resources have hampered efforts to stem the tide of disease.

“More actors are needed to treat the sick and implement preventative actions, especially as cases increase dramatically across the country,” Stefano Zannini, the charitable medical group’s head of mission in Haiti, said in a statement.

Check out a related stories:

Health In Haiti The Crisis

0 Responses to Cholera in Haiti