What is CTE or Chronic Traumatic Encephalopathy?

CTE is a brain disease that is often found in those individuals with repetitive brain trauma. CTE is Chronic Traumatic Encephalopathy. A protein, called Tau, forms in the brain following these episodes of injury. The protein causes “clumps” to form. When these clumps begin to spread throughout the Brain, it cause death to the brain cells.

Some symptoms can be seen in the 20’s and 30’s but are often explained away as other issues.

As the disease progresses, cognitive symptoms begin to appear. Symptoms may be isolated, meaning one or two, or symptoms can be seen in clusters. (Several symptoms over a period of time).

It is also interesting to understand, that not everyone with repetitive injuries to the head will develop CTE.

The disease is described as a neurodegenerative disease.

There are many people initiating Research on CTE. Learn about a few below:

This list will often change and evolve. Currently there are several that are studying this topic relentlessly.

VA-BU-CLF Brain Bank – reports themselves to be “the largest tissue repository in the world focused on traumatic brain injury (TBI) and CTE. The VA-BU-CLF Brain Bank research team conducts cutting edge research on Chronic Traumatic Encephalopathy (CTE) and mild traumatic brain injury. “Brain bank” contains more than 425 brains, including over 270 brains that have been diagnosed with CTE using the recently defined NINDS criteria for the diagnosis of CTE (6). Dr. McKee and her team of neuropathologists and other investigators have published a large number of studies focused on CTE “.  Learn more about them here: VA-BU-CLF Brain Bank

In 2008, the Sports Legacy Institute joined with the Boston University School of Medicine to form the Center for the Study of Traumatic Encephalopathy (CSTE)

In addition, the Brain Injury Research Institute (BIRI) was formed and have 20 brains awaiting research.

In 2013, President Barack Obama announced that CENC or otherwise known as Chronic Effects of Neurotrauma Consortium, would be created. This is a federally funded research group looking to address the long-term effects of traumatic brain injury with regards to Military Service Personnel and Veterans.

Currently, the best available evidence tells us that repetitive hits to the head are the direct cause of Chronic Traumatic Encephalopathy. The problem is that “a specific number” of head injuries isn’t an exact science. Having a few Concussions, is unlikely to be the cause. But dozens, to hundreds, and even thousands of impacts to the head are likely related.

This can be seen in sports, military, and others. Concussions are often the basis of a head injury, at least in sports, but research shows that “sub-concussive impacts” (less than concussions) can also have an impact on CTE. These impacts are less monitored and less understood. But their potential for damage, at least, long term, may have some involvement in CTE.

Learn about the Diagnosis of CTE

CTE can currently be diagnosed following death and examination of the brain afterwards.  The brain is taken, and slices of it allows specialists to use chemicals to evaluate the Tau clumps.

The process can takes several months to complete. This process is not normally undertaken as part of the “normal” process of autopsy.

In 2015, the National Institutes of Health partnered with VA-BU-CLF Brain Bank to develop new criteria for CTE. Now, any neuropatholigist familiar with CTE, can take the steps necessary to diagnose it. This is helping the diagnosis and initiating studies to better understand this condition.

The lack of in vivo techniques currently, which attempts to look for biomarkers, is the reason CTE cannot currently be diagnosed while a person is alive.

Often in cases of CTE – the brain itself has a decreased brain weight. This atrophy like finding can occur in different parts of the brain including: hippocamptus, amygdala, frontal and temporal cortices, medial temporal lobe, and others. 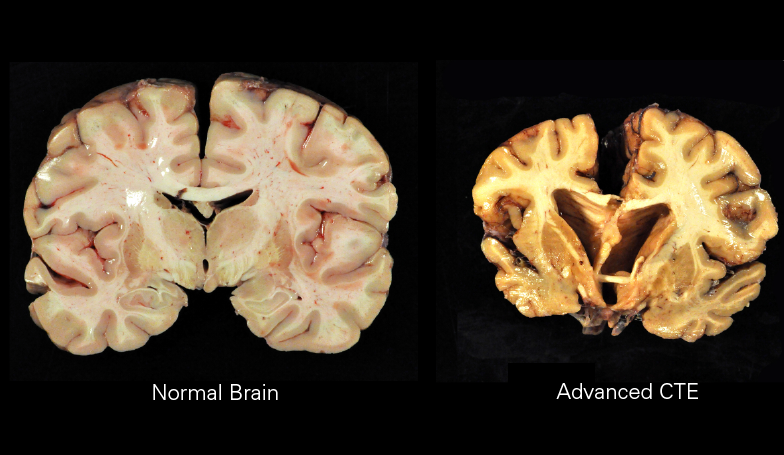 Some believe that 1 or more concussions will put the average individual at risk for CTE. The best evidence of today, shows that a single injury does not cause CTE. And again, there are several individuals who have suffered years of impacts to the head and they don’t have CTE. More research is required.

CTE was first described in 1928 by Dr. Harrison Martland in regards to the actions of a group of boxers. In the next 75 years, only 50 confirmed cases were noted.

Then in 2005, Bennet Omalu published evidence of CTE in a Amercian Football player. (Mike Webster who played for the Pittsburgh Steelers)

Treatment of Chronic Traumatic Encephalopathy is very difficult in this disease. It is believed that treatment will surround 1.) prevention of the disease and 2.) treatment of the symptoms ie: headaches, mood changes, etc.

Prevention is often the key. Soccer for example, won’t allow “heading” the ball until after age 12.

Football is looking at improving the technology of the helmet and they are calling flags on plays that directly hit the head.

0 Responses to What is CTE or Chronic Traumatic Encephalopathy?