This is a health question that medical providers, nurses, and other individuals in medicine are asked daily. It is a complicated question with a complicated answer. Botox is one of the fastest growing areas of medicine in new patients, cosmetic advancements, and pure volume of procedures. Botox is believed to be a similar function as the fountain of youth. Certainly there are bad outcomes, but is the price worth the risk? Don’t be deceived by the belief that only women use botox, Both men and women are taking advantage of this new advancement in medical treatment.

Botox is a toxin from a bacteria that produces botulinum toxin that is processed and purified. The result is a paralyzing of the injected muscles. When this toxin is injected a localized affect is anticipated and expected.

But it is not uncommon to have a response to the toxin at a different location in the body. The toxin may travel through nerve roots as argued. In addition, it can be transported to other parts of the body.

But Can Botox Be Dangerous?

There have been reports of medical dangers when it comes to Botox. This type of treatment can be both medical and cosmetic.

This area of treatment is considered a prime example of Women’s Health.

The most common uses is cosmetic. Botox leads the industry in this realm. We’ve all seen the bad outcomes from overuse or mismanagement.

As a medical tool it can be prescribed for several muscle disorders.  This medication is helpful in those patients and often improvement in muscle spasms and muscle twitching can be seen.

Botox works for about 3 months then often the symptoms return.

Cosmetic use and for wrinkles is a booming demand. Almost One million Americans are currently using Botox at a cost of almost $400 million per year. Over 4 million Botox treatments are performed annually. That’s a lot of face time. 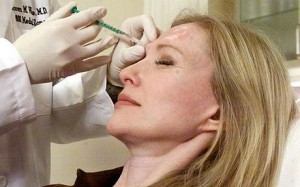 Botulism is a serious consequence to the bacteria Clostridium botulinum and some overdoses and side effects of Botox injections mirror those of Botulism.

Check out the Anatomy of the Eyes

What is Botox Addiction?

“Botox addiction is the newest concern for treatment.” said Dr. Martin Kelley, a plastic surgeon at London Plastic Surgery Associates. She and Dr. Carter Singh, a psychologist at Britain’s Derbyshire Royal Infirmary, presented a study to the British Association of Aesthetic Plastic Surgeons claiming that BOTOX® has addictive qualities for some people.

In that study almost 40% studied wanted additional treatment and felt compelled to maintain treatment even before their symptoms returned.

Others argue that some people will never be satisfied with their physical image and that an psychological attachment o addiction is not what is being observed.

In a paper back in 2005 in the Journal of American Academy of Dermatology reports that 28 deaths from 1989 to 2003 were linked to Botox injections though none of the deaths were by patients or individuals using Botox for Cosmetic use.

In February of 2008, the FDA reported that they had found some link with adverse reactions including death and Respiratory Failure by those using a wide variety of concentrations and dosages of Botox.

There appears to be little risk with Botox if it is used appropriately and when administered by a licensed and competent medical provider. When steps are taken to increase dosing and concentration then the risk of abnormal outcomes appears to increase dramatically.

Though any adverse media or news articles on Botox does not appear to have limited or decreased its use, more concern is being noticed by the main stream public. Addiction or no addiction, Botox has helped many improve their own physical looks. It depends on what you are willing to do to look several years younger.

Take a moment to see a Botox injection for a medical condition:

There is also an increase in use for men. Learn more here:

8 Responses to Is Botox Dangerous?