The Muscular System is an organ system that consists of different types of muscles including: Skeletal, Smooth, and Cardiac Muscles. This system is extremely important in a practical sense and a very useful system in the primary function of movement.

This system is controlled by several aspects including the Nervous System. Muscles themselves, depending on type and location, can be moved either voluntarily (with thought) or involuntary (on own).

The heart, for example, is self-controlled also referred to as “autonomous“.

Other Functions include maintaining posture, blood circulation, food digestion and movement, lung contracting, and much more.

–  There are approximately 639 muscles in the human body
–  Muscle mass takes up approximately 1/2 the weight of your body.
–  Muscles provide strength, balance, posture, movement, and heat for the body to keep warm.

–  An action or “action potential” stimulates skeletal muscles to contract by shortening a sarcomere.
–  Actin and myosin overlap and contract towards each other.
–  Mysoin heads are used as points of attachment or binding for actin filaments
–  The Mysoin heads swivel towards saocomere, they become detached and reattach – sort of like a rachet.
–  Energy for contractions comes from ATP (Adenoside-triphosphate)
–  ATP crossed the bridge from the mysosin heads to actin filaments.
–  Storage of ATP in muscles is very small.
–  ATP powers the swiveling of the mysoin heads.
–  Calcium ions are important for the cycle of sarcomere.
–  Calcium is released into the sarcomere when a muscle is stimulated.
–  Calcium is what uncovers the actin binding site.
–  Calcium is pumped out of sacromere when muscle at rest.

–  When at rest – ATP is produced aerobically in Mitochrondia
–  Aerobic = relating to, involving, or requiring free oxygen  (needs oxygen)
–  Lactic Acid or other similar byproducts are NOT produced.
–  Energy occurs when carbohydrates and fats are stored in the body.
–  During exercise – ATP production varies
–  If Lower levels of activity occur – Aerobic production continues
–  If Higher levels of activity occur – Anaerobic production is initiated.
–  Anaerobic = relating to, involving, or requiring an absence of free oxygen (without oxygen)
–  Creatinine phosphate and phosphagen system or anaerobic glycolsis occurs.
–  ATP is produced quickly in this system
–  Side effect – Large amounts of a waste product called – Lactic Acid

–  Control the movement of the body.
–  They allow for the movement of bones and joints.
–  Most muscles of this class involve a voluntary movement – This means that conscious thought moves the muscles 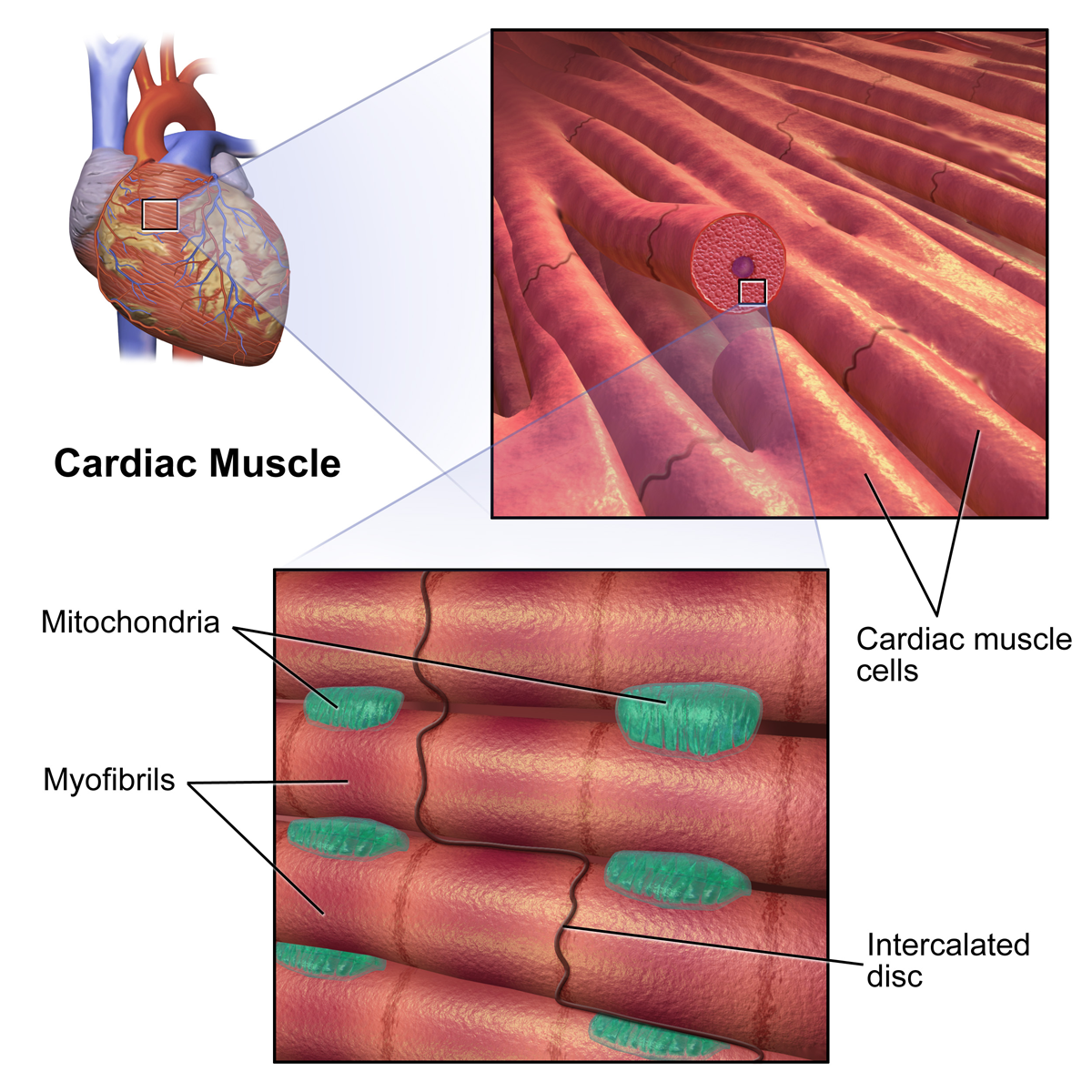 –  Control your heart.
–  The control is considered self-control, which means that your mind can’t control the beating of the heart.
–  This is called involuntary

–  Controlled by the brain.
–  Most smooth muscles are involuntary.
–  This type of muscle is somewhat different than the two previously mentioned.

–  Neuromuscular junctions are the site where motor neurons attach to muscle.
–  Acetycholine (Neurotransmitter) is released from the axon portion of a nerve cell
–  Action potential is reached at a synapse.
–  The Acetycholine crosses the synapse and causes a electrical charge.
–  This charge is the result of Acetycholine binding to a receptor.
–  Calcium is released as a result from the sarcoplasmic reticulum.
–  When the calcium is released a muscle twitch or “short muscle contraction” occurs.
–  Longer than anticipated twitch is called – Tetanus
–  Loss of Function is called – Paralysis

–  The brain allows for motor unit coordination, balance, control of frequency.
–  The part of the brain allowing muscular control – Cerebellum
–  Little to no conscious effort is required – depending on muscle type and brain function.